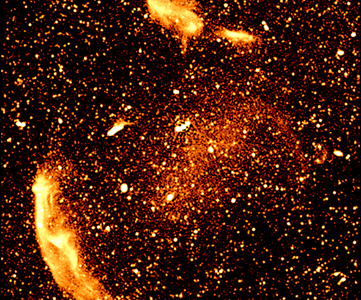 The paper, that will be published in the Astronomy & Astrophysics journal presents exciting, novel results, and is accompanied by the public release of a huge trove of curated data now available to astronomers worldwide to address a variety of challenging questions, such as those relating to the formation and evolution of galaxies throughout the Universe.

Using the South African Radio Astronomy Observatory’s (SARAO) MeerKAT telescope located in the Karoo region of the Northern Cape province, this first observatory-led survey demonstrates MeerKAT’s exceptional strengths by producing highly detailed and sensitive images of the radio emission from 115 clusters of galaxies. The observations, amounting to approximately 1 000 hours of telescope time, were done in the year following the inauguration of MeerKAT in 2018.

‘In those days we were still characterising our new telescope, while developing the further capabilities required by numerous scientists,’ said Dr Sharmila Goedhart, SARAO head of commissioning and science operations. ‘But we knew that MeerKAT was already very capable for studies of this sort, and we observed galaxy clusters as needed to fill gaps in the observing schedule.’

This was only the start. More than two years’ work followed to convert the raw data into radio images using powerful computers, and to perform scientific analysis addressing a variety of topics. This was done by a large team of South African and international experts led by Knowles, currently a Research Fellow at Rhodes University and a former SARAO Postdoctoral Fellow at UKZN.

The force of gravity has filled the expanding Universe with objects extending over an astounding range of sizes, from comets that are 10 km (one thirty-thousandth of a light-second) across, to clusters of galaxies that can span 10 million light-years. These galaxy clusters are complex environments, host to thousands of galaxies, magnetic fields, and large regions – millions of light-years across – of extremely hot (millions of degrees) gas, electrons and protons moving close to the speed of light, and dark matter. These “relativistic” electrons spiralling around the magnetic fields produce the radio emission that MeerKAT can see. Thus MeerKAT, particularly when adding information from optical and infrared and X-ray telescopes, is exceptionally well-suited to studying the interplay between these components that determine the evolution of galaxy clusters, the largest structures in the Universe held together by gravity.

We live in an ocean of air, but we can’t see it directly. However, if it is filled with smoke, dust or water droplets, then suddenly we can see the gusts and swirls, whether they’re a gentle breeze or an approaching tornado. Similarly, the motions of the X-ray-glowing plasma in galaxy clusters are usually hidden from us.

Radio emission from the sprinkling of relativistic electrons in this plasma can uncover the dramatic storms in clusters, stirred up when clusters collide with each other, or when jets of material spew out of supermassive black holes in the centres of galaxies. The MGCLS paper just accepted for publication presents more than 50 newly-discovered such patches of emission. Some of them we can understand and others remain a mystery, awaiting advances in our understanding of the physical behaviour of cluster plasmas. A few examples are shown below, some associated with the bright emission from so-called “radio galaxies” powered by the jets of supermassive black holes. Others are isolated features, illuminating winds and intergalactic shock waves in the surrounding plasma. Other types of science enriched by the MGCLS include the regulation of star formation in galaxies, the physical processes of jet interactions, the study of faint cooler hydrogen gas – the fuel of stars – in a variety of environments, and yet unknown investigations to be facilitated by serendipitous discoveries.

The MGCLS has produced detailed images of the extremely faint radio sky, while surveying a very large volume of space. ‘That’s what’s already enabled us to serendipitously discover rare kinds of galaxies, interactions, and diffuse features of radio emission, many of them quite beautiful,’ explained Knowles. But this is only the beginning. Knowles said that the findings provided new answers to some existing questions, but had also ‘unveiled a whole new set of mysteries to conquer, which is thrilling.’

Knowles began leading the project in 2019 while a SARAO Postdoctoral Researcher at UKZN. ‘I obtained my PhD from UKZN and the support and mentorship I received during my time in its Astrophysics Research Centre (ARC) provided me the platform from which to lead this major project,’ she said.

Knowles commented that MeerKAT is making massive contributions to radio astronomy, and that the data generated by this project provides a lot of scope to train the next generation of South African astronomers.

One such person is Mr Kabelo Kesebonye, a UKZN PhD student supervised by the ARC’s Professor Matt Hilton. Kesebonye contributed to the study by checking the accuracy of the MeerKAT source positions against optical galaxy catalogues and providing redshift estimates for galaxies detected by MeerKAT. He also contributed a brief investigation of the star formation activity of galaxies in the cluster Abell 209 to show how the MGCLS data will help further our understanding of the effects of galaxy environments on star formation. ‘Most of the galaxies that live in clusters are no longer forming stars, but how long it takes to shut off star formation for galaxies that fall into clusters, and how it happens, is still an open question,’ said Kesebonye.

‘Due to the large field of view of MeerKAT, and it’s sensitivity, we are able to estimate star formation rates for both galaxies that are in clusters, and which are in the surrounding environment, encountering the influence of a cluster for the first time.’

Kesebonye is currently working on a follow-up study of star formation in many of the MGCLS clusters as part of his PhD thesis work.

A number of additional studies that delve more deeply into some of the initial MeerKAT discoveries are already underway by members of the MGCLS team. Beyond that, the richness of the science resulting from the MGCLS is expected to grow over the coming years, as astronomers from around the world download the data from the SARAO MeerKAT archive, and probe it to answer their own questions.

It takes more than a village to create this astronomical bonanza. MeerKAT was conceived, designed, and built over 15 years through the dedicated effort of hundreds of people in South African research organisations, industry, universities, and government. Some 100 of these colleagues that built, operate and maintain MeerKAT are co-authors of the MGCLS paper.

The Telescope and Observatory:

The MeerKAT telescope is operated by the South African Radio Astronomy Observatory, which is a facility of the National Research Foundation, an agency of the Department of Science and Innovation.